John Woo had already made quite a name for himself in China, thanks to hit action classics such as A Better Tomorrow and The Killer. In 1992 he released the film which would see him transition from Hong Kong director, to Hollywood. The film was Hard Boiled a tale of two cops (one deep undercover within a criminal organisation) who come together explosively and join forces to take down a deranged crime lord who has monopolised the criminal underworld.

At this point the action genre was at its pinnacle for pure spectacle. We’d had the 80’s, full of classics such as Die Hard, the Indiana Jones franchise, and then came Terminator 2: Judgement Day (and the aforementioned Woo films). Jackie Chan too was rising to prominence in Hong Kong, known for the intricacy of his ground breaking fight sequences (and indeed shooting and cutting techniques) as well as insane, death-defying stunts. Stunt men were excelling themselves. Pyrotechnics were expertly created, timed and captured in their explosive glory. Before the age of CGI, if a film wanted to achieve the spectacular, the creators needed to think long, hard and logically about capturing the images as practically as possible. There were of course post production effects, as we can see clearly in the original Star Wars trilogy, but even these took an amount of outside the box, creative thinking to create. Now any image imaginable is possible to create, in any scale, but does that take away some of the creative thinking previously required? 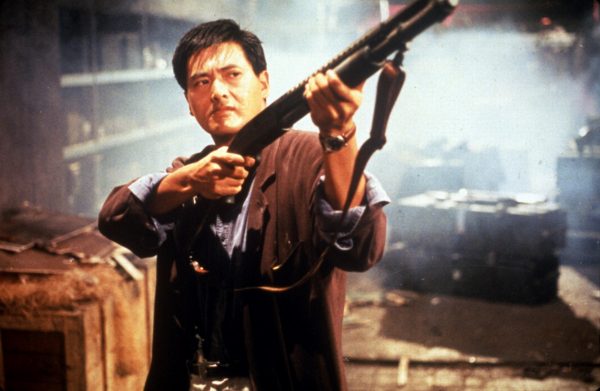 Woo’s Hard Boiled represented spectacle at its finest. This was Hong Kong cinema at the peak of its craziness. Stunt men would do things in the East that no insurance company would ever allow (or even anything half as dangerous) in the West, and this was before something as tragic as Brandon Lee’s death had taken place. People like Chan had set a bar. If this lead actor was willing to jump off a 30 foot building with no crash mat on the ground, then his stunt team had to be just as crazy, and this set the tone for other action film-makers. Woo’s brand of balletic gunplay had already gathered him a cult following in the West to add to his adoration back home (Quentin Tarantino was a huge fan even before Hard Boiled was made). Comparatively, Hard Boiled was Woo’s big budget, grandiose spectacular. Whilst The Killer was amply loaded with carnage, Hard Boiled would allow him the time and budget (microscopic compared to the big Western productions like Terminator 2) to create levels of on screen carnage and mayhem previously unseen…in the East or the West.

The film starred two of China’s finest rising actors, Chow Yun-Fat (who by this time was very well established) and Tony Leung. This was essentially De Niro and Pacino in Chinese form. The film was a critical and commercial success (though ironically not as successful as some of Woo’s previous films as the heroic bloodshed film was growing out of fashion in China). Ultimately it would gain notice from Hollywood and a certain Jean-Claude Van Damme who lobbied to get Woo over to direct Hard Target (an underrated gem which retains as close to Hard Boiled levels of Woo-ish hardcore insanity as America has been able to muster). Without even considering the action set pieces, the film had a strong dramatic core. The two leads offer superb performances and charm, the likes of which are rarely delivered within this cops and robbers action genre where stoicism and catch phrases are usually the rule of thumb. Woo could do heart. As the story unfolds and the nature of Leung’s character is revealed it adds in further layers of complexity, and both leads must deal with loss and personal torment. Dramatically the film holds up well, and this in turn hooks you into the film emotionally, making the action sequences even more thrilling. 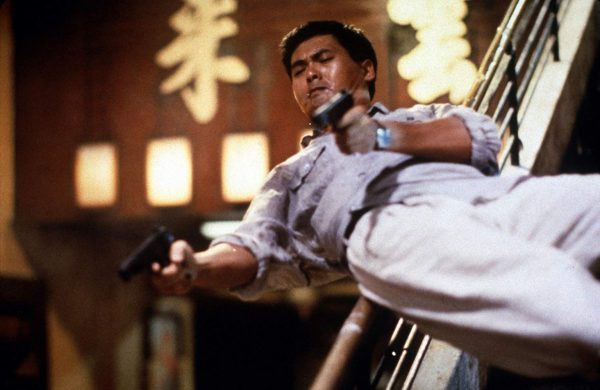 When the guns come out, Hard Boiled steps up to a whole other level. If you’ve not seen the film you need to. Everything is captured in camera. The film took around four months to shoot and every minute has gone into ensuring the film was spectacular. When a gun is fired and shell casings fly out, and walls rip apart, pillars explode to rubble, doors blow off hinges, windows shatters and bullet holds shred corridors, it’s all captured practically. It’s not 10%, 20% done on set and finished on the computer.

These action sequences are an assault on the senses. As men fly through the air or motorcycles explode in the middle of an air jump (with rider still on) you cannot help but be astounded at this collaboration between director, stunt man, pyrotechnicians, effects crew and editor. It all comes together beautifully. The opening tea house shoot out is fantastic. When you sit and watch that, you’re hooked. You know this is going to be exciting. The middle warehouse sequence is on a whole different planet. Setting the bar further higher. By the time the non-stop and brutally exhilarating hospital finale has finished you are exhausted. It’s a ride and a half. So many amazing little moments within great sequences. Moments where even among the jaw dropping feats of technical and creative brilliance, Woo still manages to find a moment of dramatic power. The infamous one take hallway shot, which runs over three minutes is a marvel of filmmaking ambition and exceptional delivery. A shot which never cuts (well, minus one sneaky, unseen snip in the middle) and spans two floors (thanks to the most simple technique of rapidly redressing a set behind elevator doors, to fool the audience) is a wondrous thing of beauty. Two cops and an array of bad guys absolutely destroying the place. Gun fire everywhere. Complete and utter carnage and Woo drags the audience right inside the sequence and doesn’t let you out for three minutes. 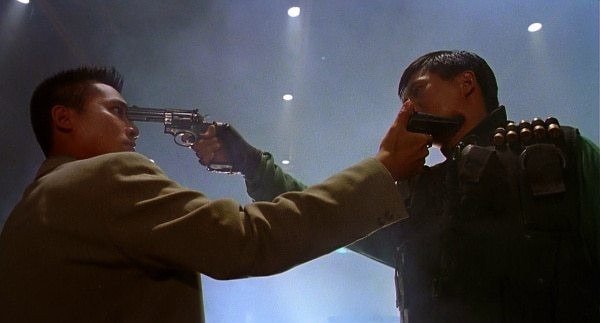 I won’t say Hard Boiled is the best action film ever made. It’s certainly up there. As far as the action sequences though it certainly is one of the greats. It’s also testament to the fact that no amount of CGI, no matter how spectacular, can come close to creating something as engaging and exciting. Hard Boiled brought to a close a period in Eastern cinema, but also came at a key time in Hollywood. I previously mentioned Terminator 2. That was a great action film. Huge set pieces loaded with astonishing practical effects and stunt work. The truck/helicopter chase is mesmerising. In many ways this represented both the pinnacle of Hollywood spectacle, and the beginnings of the demise. The revolutionary CGI used in the film (which still holds up) would pave the way for the blockbuster we know of today. T2 showed the best balance (and in those burgeoning stages of computer imagery of course had to) in adding those CG touches to predominantly in camera action. The T-1000, those liquid metal effects, were simply the cherry on top of the cake. Nowadays most action films are just a big CGI cake, and if you’re lucky will have a practical effect cherry on top.

This is not to say there haven’t been worthwhile action pictures since 1992. Of course there have. The Matrix has become iconic. Casino Royale was as old school as you can possibly get nowadays, and Mad Max: Fury Road was an exercise in adrenaline with fantastic action scenes and even with the CGI elements, still portrayed a sense of genuine insanity and danger from the stuntmen. It just seems nowadays that the art of setting up a few thousand squibs for a single shot is deemed unnecessary when you can just do it all in post. However your actor (or stunt man) isn’t experiencing the live element on set and we’ve yet to reach the stage where CG looks as convincing as genuinely tearing the crap out of a set. Even putting aside the issue of CGI though, Hard Boiled’s intense and relentless, beautiful and balletic set pieces still haven’t been matched since. The reckless disregard for health and safety is also something that we’ll not see again, which partly contributes to the eye shattering craziness witnessed in Woo’s master work.