Earlier this year, Universal Pictures announced that it is developing a reboot of the classic 1996 disaster movie Twister with Top Gun: Maverick director Joseph Kosinski being eyed to helm the project and Frank Marshall (Raiders of the Lost Ark, Back to the Future) producing the project. Now, in an interview with Collider, original Twister director Jan de Bont shared his thoughts of the recent announcement, in which he revealed that he is concerned that the new film may just simply be bigger in scale compared the original film.

“I read that like a month or two ago. I said, ‘Wow. Are they going to do the F5 now? I bet you that’s what it is,’” de Bont said. “You cannot do it by making it bigger. That as a movie hardly ever works. You have to come up … with people actually involved in it. You cannot just … it’s like, I’ll work on the destruction scene. We’re going to get worse and whole cities are going to get destroyed. That’s exactly like falling in the trap of having the special effects completely take over.”

Although plot details are vague on the upcoming reboot, the original 1996 film starred Bill Paxton and Helen Hunt, who played storm chasers and a couple on the brink of divorce who are researching tornadoes to deliver their advance weather alert system during a case in Oklahoma. The film was directed by Jan de Bont (Speed) and also stars Jami Gertz, Cary Elwes, and Phillip Seymour Hoffman.

Are you looking forward to the upcoming reboot of Twister? Let us know on Facebook or Twitter @flickeringmyth… 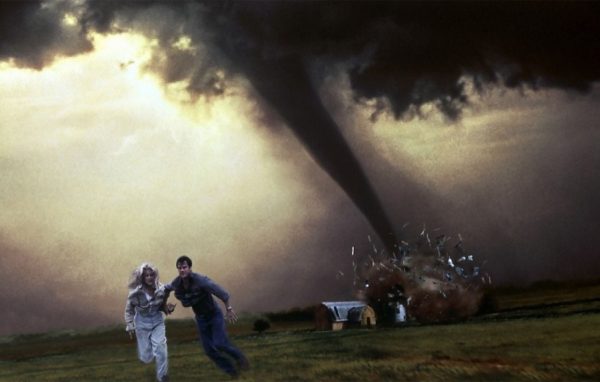