Covert security company Vanguard is the last hope of survival for an accountant after he is targeted by the world’s deadliest mercenary organization. The appearance of a new Jackie Chan film used to bring with it a great sense of expectation. His Hong Kong work, in particular through the 80’s, well into the 90’s (at which point I had my introduction) were a stream of films with high energy set pieces and a persistent ream of visual gags. The prospect of Chan teaming with Stanley Tong would also previously have brought with it, a real sense of expectation too (though in truth, Chan’s been even better served in collaborations with Sammo Hung, or when he’s directed himself). Rumble in The Bronx and First Strike were two of my earliest encounters with Chan and they were loaded with so much energy, that they were impossible not to enjoy.

More firmly backed by mainland China these days, Chan continues to consistently deliver spectacle to the Chinese audiences. In most cases the heady doses of sentimental jingoism and cranked up melodrama are greeted favourably. For Western audiences, they can occasionally hit the ground with a thud. Bleeding Steel was pretty awful, and though these bigger budget Chinese productions have a clear influence from Hollywood blockbusters, to the Western eye much of it will feel outdated or cobbled together with a slight feeling of being a haphazard version of Western blockbuster cinema. Like those T-shirts written in English that are popular, but to a native speaker are nonsensical (or the direct opposite of someone in the West getting Hanzi tattooed on a body part under the misapprehension it means something profound, when it’s probably also nonsense), it’s an approximation of what you’re intending to mimic. 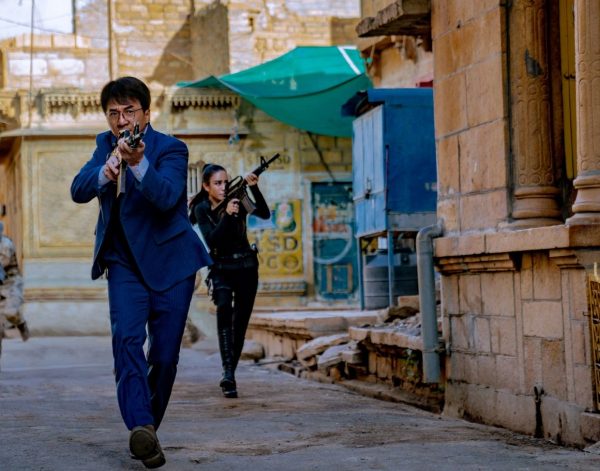 Not for the first time we have a big Chinese production that kind of best guesses the American movie structure, then dials up the pro-government sentiment and melodrama. Here, Chan plays the head of Vanguard, a private security firm, stationed in London. He takes on the case of an accountant who has been targeted by a terrorist faction in a globetrotting adventure that takes place in London, Africa and Dubai. The age is showing now, and Chan takes something of a back seat for a selection of bright young actors to take on the majority of the fighting and physical exertion. On the whole the Vanguard team is a likeable bunch (and all of course, unshakably morally upstanding).

Vanguard isn’t particularly good (nor terrible by any means). It’s heavy handed in a lot of respects and a little clumsy, but it never hits quite enough energy. The young cast do their best, but lack the magnetism of the star attraction in his prime. Somewhat disappointingly, Chan is lacklustre in most counts. There are occasional moments of nostalgic Chan comedy, but they almost seem out of place in a film that is wildly inconsistent throughout. There’s the kind of lack of subtlety in depictions of the non-Chinese characters (particularly the middle east here) that you could understand somewhat 20-30 years ago (but in 2020, not so much). Broadly stroked, almost xenophobic depictions (if it had the irony, that say Sacha Baron Cohen douses Borat in, it may work, but it doesn’t). Tong’s dynamic approach to set pieces does create some enjoyable action, but even on that front, it occasionally feels light and lacking in the ingenuity that was near perpetual in Chan’s Hong Kong days. It may well be the first time too, that I wasn’t particularly enamoured with a Chan character. He’s never less than likeable, but he’s always been endearing too. That is lacking a little here, and ultimately, that would also have helped ingratiate the younger cast with the audience. As a time passer, die hard Chan fans will probably still find enough, and even if the main man himself feels a little off, there’s an overriding sense of fun and vim from the younger cast (and indeed Tong in the more lively sequences). There’s not much in the way of a plot to follow (that’s never been a film killer for a Chan movie, but he traditionally had a lot more on display to compensate). A few wry digs at America are quite amusing too, but I don’t know how many American’s will be rushing out to see this anyway.