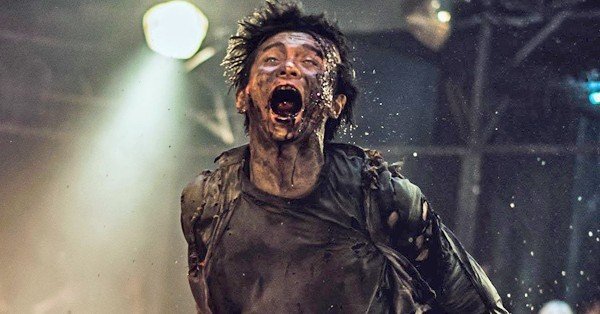 It’s four years since South Korea was decimated during the events of Train to Busan, and now survivor, Jung-seok has to relive his nightmare when he joins a retrieval mission into the zombie-ridden wasteland.

In the post-apocalyptic world of the zombie genre, the common vernacular for a large group of the slathering brain biters is a herd, or a swarm. Occasionally a rogue member of this shuffling mass will break free and deliver an indelible bite to the arm. The undead subgenre has become a little like a herd over the past couple of decades, with the occasional classic lurching out to leave its mark on a tired audience; 28 Days Later, One Cut of the Dead, and most pertinently here, Yeon Sang-ho’s 2016 blockbuster Train to Busan.

A sequel was inevitable, but where does this shared universe follow-up fit in the pack? The answer is somewhere in the middle. Not original enough to lead the way, not different enough from the other members of the herd to leap out and scar the flesh. Whatever a three-star zombie looks like, then that’s Peninsula; nowhere near fully rotten, occasionally stumbling, but with enough life in it to make it stand out from the crowd.

Instead of attempting to rehash what made Train to Busan so uniquely propulsive, which could have resulted in something of a Speed 2 effect, Peninsula takes a completely different approach to its story. A much simpler, recognisable tale of survival. Sure, there’s still an element of kinetic momentum to the plot, but it manifests in a series of Fast and Furious style car chases, which when compared to the compartment race of the first film, they all feel relatively mundane. After a brilliant ferry prologue that establishes a time and location shift from the initial outbreak, one which packs the biggest emotional punch of the entire film, Peninsula turns into a heist movie, with a bunch of characters you don’t necessarily feel much of an emotional connection with.

Whereas the original felt a lot more organic, Peninsula often comes across as a tie-in computer game, with detailed cut-scenes and front-loaded action set-piece exposition such as “the zombies are blind at night and only react to sound”. So-much-so that you fully expect ‘PRESS START’ to flash up on the screen, and even the brilliant score sounds a lot like that of The Last of Us 2. But however fun these sequences turn out to be, and they are exactly that, each expertly executed, you never feel as invested as you did on that train.

When the action switches from repeated scenes of vehicles ploughing through CGI zombies, we’re introduced to a group of one-dimensional bad guys, whose gladiatorial fighting arena isn’t exactly fresh when it comes to the zombie genre, but at least it’s change of pace, and it presents us with the repulsively memorable sight of a group of zombies tied together to make one grotesque fighting monster come end-of-level boss. Touches like that are in direct contrast to the streamlined brilliance of the first film, but in a movie with so many familiar zombie apocalypse beats, it’s a stand-out moment of originality. Peninsula was never going to reach the high bar set by Busan, and while it remains an intermittently thrilling chase movie, the fact that it’s so formulaic and derivative dims your desire to see what other survivor stories might play out in this world.