A group of high school students form a coven of witches. A sequel to the 1996 film, “The Craft“. Taking place 20 years after its predecessor, The Craft: Legacy feels more like it was based on ultra-woke tweets rather than serving as a continuation of the original film. Those are also not words I use lightly considering writer and director Zoe Lister-Jones is both a capable actor and filmmaker (Band-Aid was a terrific and emotionally honest debut, a description that couldn’t be any further from this follow-up feature), but even when the film is briefly casting an engaging spell the characters still feel like they are interacting via social media buzzwords instead of dialogue resembling real teenagers. And even when the conversations shift to something mainstream it still feels phony (do teenage girls really care about Twilight anymore, especially ones practicing and taking seriously a grounded form of witchcraft).

It doesn’t help that the event kicking off everything that transpires feels more ripped from Carrie than homage or a spin on the dynamic. The bullying here also doesn’t feel inspired or authentic, which could possibly be chalked up to the PG-13 rating. Let’s not even get started on the cliché and formulaic storytelling when the film transitions into mystery/thriller territory during the third act. At most, it could be said that the empowerment coming from these young women exploring and discovering their powers while also trying to utilize them responsibly feels executed in a way that could speak to that target demographic, but the movie also gets bogged down by betrayal, late-game villains, and a tacked-on connection to the first movie (even if you haven’t seen it you’ll be able to catch on to the tie-in) that what’s left is an experience that disappointingly fails in telling satisfying character arcs for these girls.

As The Craft: Legacy begins we are introduced to Lily (Cailee Spaeny) and her mother Helen (Michelle Monaghan) moving into the home and family of Adam (David Duchovny), effectively starting a new life. Lily has always had trouble making friends but this move provides a new opportunity as she attracts the attention of a trio of witches looking for their fourth member to not only officially become a coven but to actually begin casting magic. Each girl is tied to one of the four elementals, and in the case of Lily’s friends, that’s pretty much the extent of their characterization (their outfits are sometimes color-coded matching elemental property they represent).

Additionally, Adam also has three sons that sort of blend into the bullying Lily faces. In one of the film’s only intriguing creative decisions, the newly formed coven decides to cast a spell on the handsome but problematic Timmy (Nicholas Galitzine) that causes him to instantaneously change his line of thinking. For example, during a sex education lesson on consent that most of the boys childishly and infuriatingly downplay, Timmy vocally expresses his outrage at the behavior of his classmates. It’s not exactly the most subtle sequence, but the hex leads to Timmy becoming a more sensitive and emotionally vulnerable human being that opens up about some secrets his misogynistic overly masculine father would disapprove of. 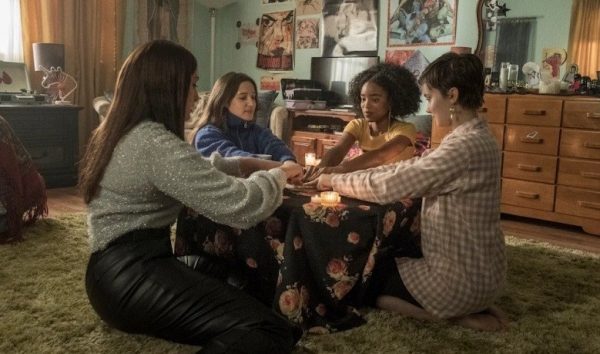 A better movie would have taken this dynamic and ran with it for heavy family drama and romance, so it’s actually shocking how fast The Craft: Legacy is to disregard that and go in a different direction. What’s most frustrating is that what the film eventually devolves into is so far removed from teenage girls coming into their own bodies and powers, hanging out, and getting a handle on who they are, it’s all a disservice to the characters and undoes those well-meaning intentions. The climax whacks you upside the head with a takedown of patriarchal norms, but it doesn’t mean anything if the characters are one-dimensional and uninteresting winding up in action sequences boasting 1990’s special effects.

The study of toxic masculinity works, which I can only presume is an idea Zoe Lister-Jones had that made her sign on to the project in the first place, whereas everything surrounding that is a combination of bad writing and studio interference. Overbearing musical compositions also start blasting at the most inappropriate times leading to unintentional hilarity during what should be tense moments. Actually, now it makes sense why the girls were talking about Twilight; The Craft: Legacy is cut from the same cloth of terrible fantasy.