A disabled girl finds herself trapped in a house with a rabid dog. In the crowded world of horror cinema, a great concept is only half the battle. Many of the best genre efforts of recent years have been built around a potent central idea, but it takes expert-level execution to make that idea work on the big or small screen. Sadly, director José Luis Montesinos doesn’t quite stick the landing with Ropes – also known as Prey, or by Spanish title Cuerdas. It’s a sadly limp tale, devoid of tension despite the impressive potential of its central conceit.

That idea focuses on teenager Elena (Paula del Río), who has been confined to a wheelchair and left with very limited upper body mobility in the wake of the car accident that killed her sister Vera (Del Río again). Her father, Miguel (Miguel Ángel Jenner), has adapted their home for her using a series of ropes on door handles and drawers, as well as bringing in super-intelligent support dog Athos. Quickly, things so south. Athos has been bitten by a bat – an unfortunate coincidence in 2020 – and is now showing increased aggression, while Miguel collapses after suffering a heart attack in the front yard. Elena is trapped, with only her wits keeping her safe from the slavering canines of the slavering canine. 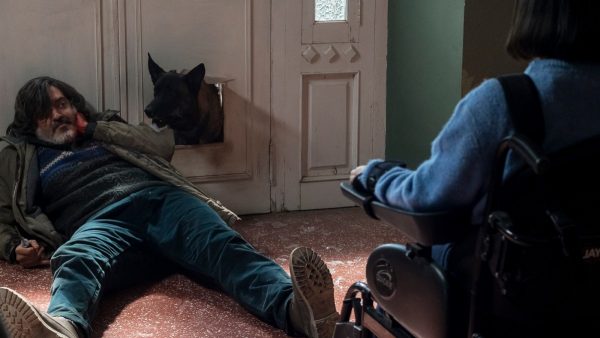 The most obvious comparison point is the Stephen King tale Cujo, in which a mother and son were menaced in their increasingly sweltering car by a rabid St Bernard. It made its way to the big screen in 1983 via director Lewis Teague, who delivered a palpably sweaty and utterly terrifying tale of claustrophobia under the beating sun. There’s little of that intensity in Ropes, which has a curious lack of suspense. It’s difficult to pinpoint why, but it’s almost entirely inert.

It would be unfair to put that failing at the door of Del Río, who delivers an impressive double performance. As Elena, she is entirely believable as a woman struggling against her physical limitations amid a life-and-death struggle whereas, as Vera, she transforms into a quasi-demonic representation of Elena’s guilt and regret. She’s acting her socks off in every scene, delivering a performance of incredible physicality which allows her to hold the camera in the many scenes in which she’s the only person still alive. The problem comes with the writing. Montesinos’s script, co-written with Yako Blesa, ladles on syrupy sibling drama without ever really giving either sister anything approaching a personality. We know that Elena has recently attempted suicide but, beyond that, there’s nothing to her beyond her disability and the fact she has a ferret friend called Luke. Don’t get too attached to him. To an extent, it’s easy to buy into the woman versus beast battle at the heart of the story, but there’s nothing more to it than that basic approach.

Without any meat on the bones of the protagonist, there’s little to juice up the agonisingly slow pace of the story. Even at fewer than 90 minutes, it feels stretched to breaking point – it might have been more effective as a short – and culminates in some deeply stodgy, overwrought drama. Unconvincing effects work mars some of the critter action and, overall, the entire thing pales in comparison to other isolation survival tales, like the aforementioned Cujo and fellow King adaptation Gerald’s Game. Its bark and its bite are, sadly, just as toothless as each other.