A holiday romantic comedy that captures the range of emotions tied to wanting your family’s acceptance, being true to yourself, and trying not to ruin Christmas. 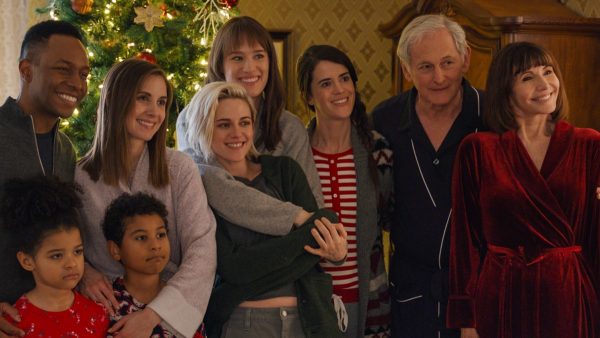 There comes a point in Happiest Season where the reasoning behind Harper (Mackenzie Davis) having yet to come out as lesbian doesn’t so much come down to a concern of acceptance but rather a strict upbringing of high expectations that pitted her and her two sisters (played by Alison Brie and one of the film’s co-writers Mary Holland) in a competition of “who is the perfect daughter”. That is fine, but director Clea DuVall (also pulling double duty as the other writer on the project) has opted to include parental figures (Mary Steenburgen and Victor Garber) that are there to bring laughs, resulting in some mild confusion when the sibling rivalry started to become more prominent to the story.

This dissonance results in a movie that doesn’t really know what it wants to be; a serious examination of lesbian relationships, the challenges of coming out to immediate family, a lesson on how everyone’s story is different, or your standard Christmas romantic comedy that typically climaxes with shenanigans. It also causes the performances from Mackenzie Davis and Kristen Stewart (playing her lover Abby) to feel like they are inside a different, much better movie. And that’s a shame considering they are restrained, actively making nuanced choices to give the movie real dramatic heft. 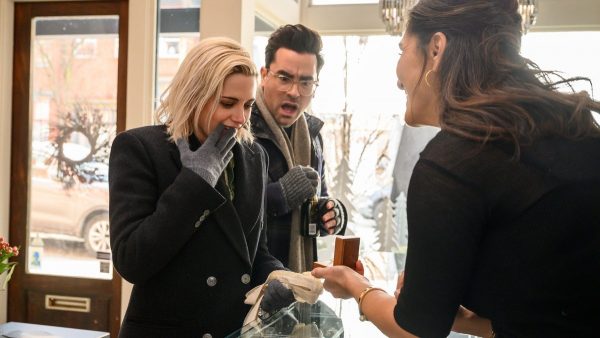 That dynamic happens to be a familiar meet-the-parents scenario as Harper asks Abby to come to her home for the holidays and finally meet her family. Not necessarily a fan of the holidays having lost her parents as a teenager, Abby is content making some side money watching over other people’s pets while they travel to be with their families during the holidays but is also ready to take this healthy and stable relationship to the next level and see what the people that made her favorite person in the world are like. So she decides to go and tasks her friend John (a highly funny Dan Levy whose humor actually feels like it fits alongside the authenticity of Harper and Abby rather than the cheap jokes everywhere else such as one daughter being considered a disappointment for being dorky and writing a fantasy novel) to cover for her.

It’s not long before we realize the parents are basically empty vessels of character and that the script is not sure what to do before any real conflict arises. Admittedly, there is a short scene at the skating rink where the sisters decide to see who can do three laps the fastest, but instead of actual competition meant to expand on how strained these women are to remain reputable and the best, it’s played for laughs and probably why I forgot about the scene until writing this review. The core material the film wants to address is simply sanitized to a degree where everything feels too safe.

I don’t want to take anything away from the difficulties of coming out, but it almost feels like the filmmakers knew they had to pin Harper’s reluctance to come out to her parents on the sibling rivalry aspect, because not only is there nothing to imply her parents wouldn’t accept her, it’s difficult to buy that someone doesn’t know their parents that well enough into their mid-20s/early 30s that they don’t know if they will be accepted for being homosexual. The entire reason people fear spending time with certain relatives on the holidays is that we generally know where everyone stands on social politics and want to avoid the ones that drive us crazy or make us feel unaccepted. That doesn’t stop the movie from planting the seed of that fear, as while running for mayor Harper’s dad does give a speech about not letting the small city become overrun with depravity, but even then there’s no indication he’s talking about homosexuality being a part of that.

Nevertheless, Harper becomes somewhat two-faced spending time around an “ex-boyfriend” to keep up her perfect image around her parents. Again, none of it matters because there’s never one point where it feels like these parents are either intolerant or have psychologically damaged their children, but it’s the one dynamics that allow for Kristen Stewart and Mackenzie Davis to take advantage of their acting talents, allowing for some mild investment. Meanwhile, Abby gets to know Harper’s unofficial high school girlfriend Riley (Aubrey Plaza, putting in decent work for this smaller role), a distant woman that still seems crushed by how their relationship ended. With that said, at times the film seems like it’s going a bit too far making Harper unlikable, which would be fine if it actually felt like there was something harmful regarding her upbringing. 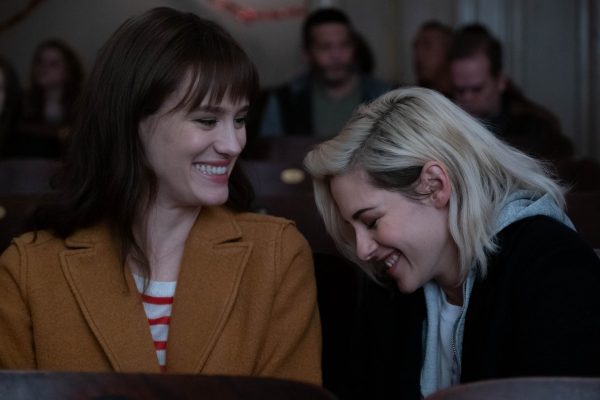 There’s still no second-guessing how Happiest Season going to end, but at least they are trying to find the authenticity and emotional backbone of the narrative. Unfortunately, they are surrounded by coal. Happiest Season certainly feels like it wants to be earnest and sincere, but loses its way among cringe comedy and Christmas clichés that undercut the message.