Like any musician who feels passionately about his art, Golden Globe and BAFTA nominated composer Alex Heffes knows Ronnie Scott. Maybe not in person but through reputation, musical trailblazing and jazz club definition. It is no surprise then that his involvement with a new documentary simply called Ronnie’s, should feel anything other than serendipitous. A renowned composer for projects including The Elephant Queen, The Last King Of Scotland, Mandela: Long Walk to Freedom and many others, Alex recently sat down with Martin Carr to talk about what Ronnie’s meant to him. 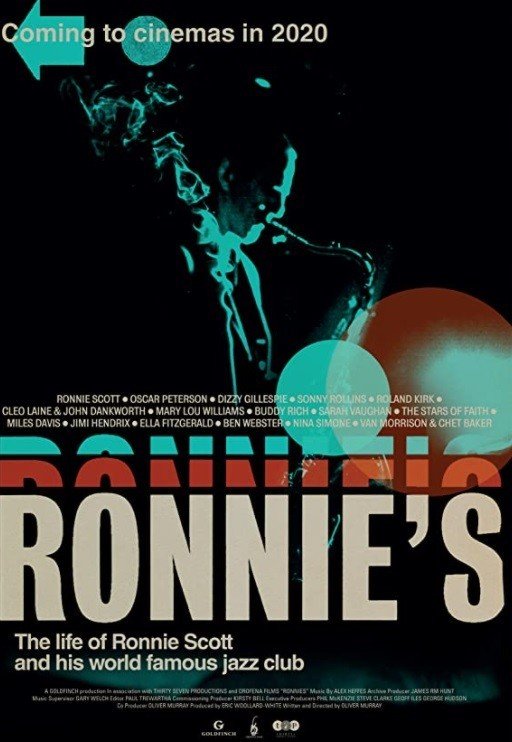 It was very important to me as I am huge jazz fan. These days I don’t get to do much jazz in film but when in my younger days just out of college I formed a jazz trio. During that time I lived the jazz lifestyle for a short time being paid nothing and playing in clubs through the night, so for me the music is part of my heritage. For that reason Ronnie’s was very close to my heart personally so I was delighted to do it.

For me this film felt like a real passion project for Oliver Murray, did that prove to be the case when it came to scoring as well?

Definitely. He was just so open about how things should be approached and passionate about wanting to tell the story of Ronnie’s inner life alongside that of his club. In a way the club narrative is well taken care of by all those wonderful performances, so trying to dig into Ronnie’s more personal side was what we aimed to do throughout.

As this film is intrinsically devoted to music, how do you see the role of an original score fitting into this project?

It’s a question I asked myself as well as talking to Oliver the director about. How we could make a score fit around all the incredible performances, making sure it gelled with them without butting up against them. I wanted to write a jazz score but also didn’t want to get in the way of any music in this film, so my proposition to Oliver was that we created something with a jazz inflection. I chose a small combination of instruments including piano, purely because I don’t get to play jazz anymore. We started with piano and vibes to give some sustain before including a saxophone. We wanted the saxophone but deliberately steered clear of the tenor because we felt it would be too on the nose, it being Ronnie’s instrument. I am a big fan of soprano saxophone and I had heard Trisha Clowes play, so suggested we use that instead as it has an in between quality. One that puts it firmly in the jazz camp but when you hear it you might mistake the sound for another woodwind instrument. From there I wrote melodic lines on the soprano, then incorporated an upright bass and asked Alec Dankworth to play being both a fan of his and the fact that his parents also feature in this film.

Having created this little group what we did instead of creating a jazz score was write a theme for Ronnie on the piano, then record it and capture individual chords in an analogue synthesizer. Instead of them being a second or two long I stretched them out to three or four minutes each and resampled a lot of that. From that I created synth patches which sound organic and were used as a base, then played the jazz ensemble over the top. My intention was to try and capture a sense of nostalgia whilst giving it a jazz inflection which didn’t impact on the live performances.

How do you think Ronnie’s journey from musician to club owner was represented through the score?

For me that question is one quite central to the film, because as I understand him music was his core and he might have felt that was perhaps more important than being a club owner. I think he would have preferred to be out front playing rather than speaking more and there is that clash of interests in the film – a slight sadness and pride about him which always veered slightly more towards his need to perform. I tried to write a theme which wasn’t too maudlin for him but had that tonal sadness. There is that theme of depression in the film which I didn’t want to be too overwhelming, but a darkness definitely shades the score and gives audiences an impression of that potential split personality. Would you say that creatively performers are quite divided in terms of their need to perform, versus an offstage persona which contradicts that desire in terms of being quite insular?

I think so and it reminds me of a favourite section of mine in the film. Where there is some voice over from Ronnie and he talks about that feeling you get from performance. That feeling which is almost transcendental during a solo as you feel this sense of detachment akin to an out of body experience. Something else is happening and I know that feeling from the small amounts of performing I now get to do, which is I think what you are saying. Even performers who can be quite nervous on stage or don’t like talking to people when they are playing enter that transcendental state. Not only was it a favourite bit to watch for me but also something I enjoyed composing for, because it is a moment of lightness where all their other worries disappear momentarily. The financial issues, personal problems and depression all take a back seat and Ronnie is just talking about his joy of playing, which is the core of anyone who plays or listens to music. Those who really love it are transported and that’s the point of it all I think.

Thematically you have already touched on Ronnie’s theme — was that your starting point in terms of composition?

Really it was writing that theme and I played it to Oliver first of all. But as I have said we both felt it was too much of a straight forward jazz theme, which is why I wanted to almost remix it. There is an aspect of rebirth which comes towards the end of Ronnie’s, where we revisit some of the musical elements in the score from the beginning. Something which was supposed to have this rejuvenating affect after Ronnie’s death, allowing us to step into a new era almost. Our intention was to give it a sort of phoenix from the ashes rebirth at the conclusion, potentially imbuing the future of jazz with hope. Unfortunately it came on the heels of the pandemic, but I guess we’re all in that position now and just hope the club survives. I must admit that did cross my mind when I was watching it.

It’s funny isn’t it? I was watching bits of it the other day and just seeing so many people all sitting close together in a tiny space is a funny thing now. I think it gives me hope that this is what normality looks like and at some point we will all just snap back into that hopefully.

How do you think the convergence of musical performances and original score complement each other?

Oliver was very clever in how he structured some of those performances. He used them to an extent in the same way you might use score. The Nina Simone sequence which is used in the middle of Ronnie’s depression segment is so powerful in telling that story. We could have used score but instead that comes out of the Nina Simone performance and adds some more musical paragraphs to those feelings. If the performance is being used in a narrative way as well as being a wonderful standalone thing, score was designed to seamlessly transition out of that. It’s not that what I did was utilise the same music but just try to be transparent and augment the feeling this performance instilled.

There is also a Chet Baker sequence where he is doing Send In The Clowns I think and that is another example, where Oliver used it for narrative purposes. A lot of the most challenging elements of the score are those you don’t notice, where score has to segue in and out of performances. Moments where as an audience you are completely engaged with the film and score needs to enhance it, without making the process disruptive to your experience. It is a tricky thing to achieve and if done well people hopefully never notice. Considering the greats that play in this film, if you could perform with anyone alive or otherwise who would it be?

All the people I would want to perform with I would be terrified about playing with. If I wanted to sit down and play the piano with Oscar Peterson which would be the highlight of my life, I would barely be able to find middle C on the piano through nerves. I think as much as I admire pianists and saxophonists it would probably be as an accompanist to a singer, because at least I would be able to offer something to support what they do.

I really like character voices and someone who is not particularly well known is Blossom Dearie, an American jazz singer and pianist from New York. I am a big fan of hers because she has such an unusual character voice as well as being a brilliant pianist. So I would just like to sit down with Blossom Dearie and play a simple ballad.

Many thanks to Alex Heffes for for taking the time for this interview. Read our review of Ronnie’s here.